Testing various hypotheses in a Bayesian setting is done through Bayes factors (the p-values of Bayesian statistics). There are many hypotheses that can be tested, for example

Note that we always formulate a hypothesis A together with another hypothesis B and we will estimate a Bayes factor that represents the evidence of “A versus B”, not “A versus not A”. So, it takes some care to formulate hypothesis of interest and specify them in a way that makes it a property that can be measured on the parameters and tree of a BEAST analysis.

Let us consider the following hypotheses on the origin of Indo-European languages:

This translates into the following properties on a tree based on a large sample of Indo-European languages:

There are two main methods for estimating Bayes factors:

The latter is more convenient, but is only possible if during the MCMC both hypotheses can become true. For the Indo-European sample, the tree can have a root in the range 5-6ky as in hypothesis A, and can move to the range 8-9kya as for hypothesis B. It is not always possible to jump between the hypotheses, for example, jumping between strict and relaxed clock is not implemented (yet), so requires running the more painful path or nested sampling route.

See below on how to interpret the Bayes factor.

Bayes factors by sampling from prior and posterior

To estimate the BF, proceed as follows: 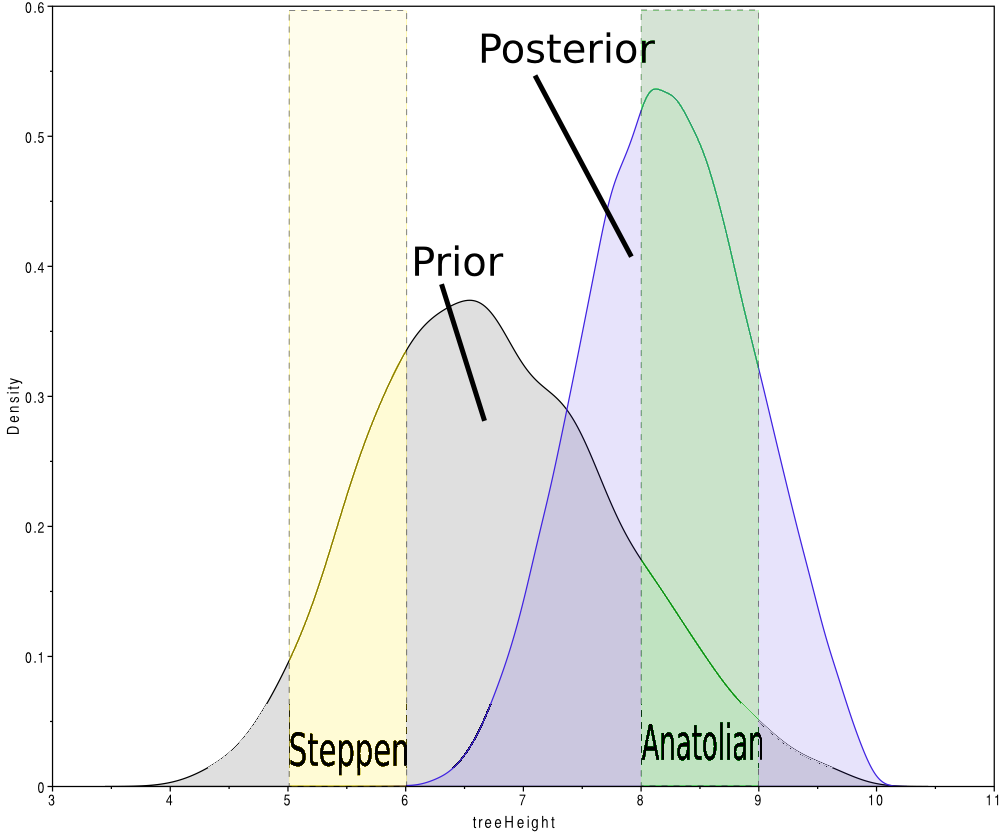 The graph above shows the prior and posterior distributions of the root age for Indo-European languages. The prior is chosen to be more or less symmetrically distributed over the two hypotheses (perhaps slightly preferring hypothesis 1). Note that there are quite a few samples where the prior is in between 6 and 8kya, which is an area not covered by any of the two hypotheses. This is to show that it is not necessary for the MCMC to be only in states that are hypothesised.

When you have more than 2 hypotheses, you can

The strength of support from Bayes factor (BF) comparisons of competing models can be evaluated using the framework of Kass & Raftery 1995.