Species delimitation is the task of defining boundaries between species - a problem which has persisted in biology for eons. There exist numerous rapid likelihood-based approaches to this problem which can define species boundaries from genomic data. However, these approaches are largely restricted to single-locus data and are thus unable to account for the fact that genomic regions frequently have different evolutionary histories from one another, and from the species itself. The coalescent-based species concept accounts for these processes and also enables the quantitative testing of different hypotheses. This approach relies on the multispecies coalescent (MSC) model.

In this post I will give a general overview of the newly released SPEciEs DEliMitatiON package (SPEEDEMON) for BEAST 2. This application performs fast Bayesian inference on both a) multilocus biological sequence data, and b) SNP data, all under the multispecies coalescent framework. SPEEDEMON is built on top of a complex hierarchy of phylogenetic methods, which have been previously implemented in the StarBeast 1-3, SNAPP/SNAPPER, DISSECT/STACEY, and BICEPS packages for BEAST 2.

A user-guide describing how to install and use SPEEDEMON can be found here.

The YSC tree prior

Species delimitation is implemented as a tree prior distribution known as the Yule-skyline collapse (YSC) prior. The model is the combination of two tree models: 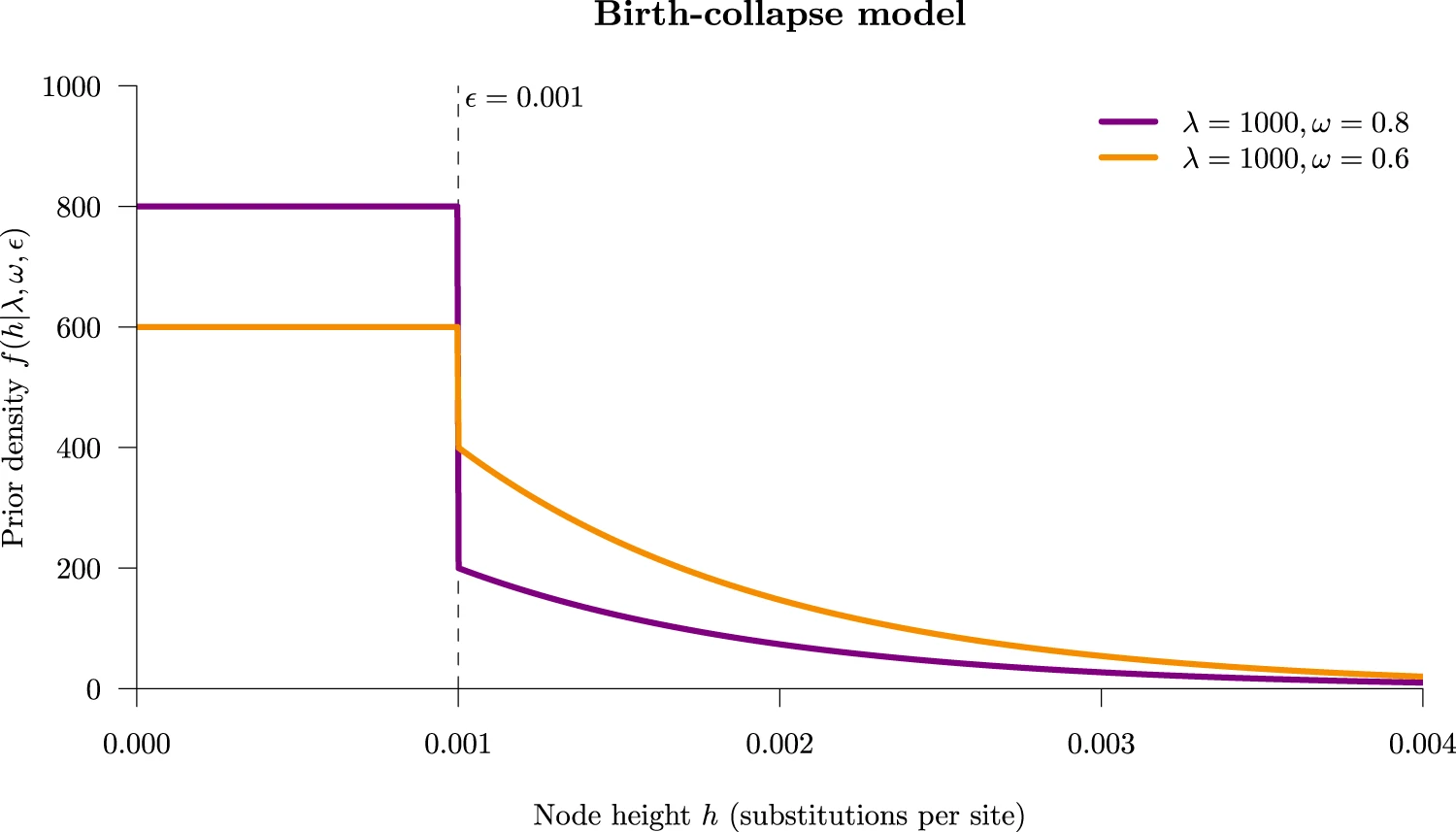 Taken together, the YSC model clusters taxa into a species if their divergence times are small, while also allowing the diversification rate to vary through time.

SPEEDEMON can work with SNP data as well as multilocus biological sequence data. These two data types are associated with different likelihoods and different BEAST 2 packages.

In this model, each SNP is modeled with its own phylogeny (which are integrated out) constrained within a species tree (which is estimated). The SNAPPER package for BEAST 2 has an accurate approximation that allows a fast implementation of this model. The YSC tree prior can be used in conjuction with SNAPPER to infer species boundaries from SNP data. I refer the reader to ref [1] for an application on Gecko SNP data.

I refer the reader to ref [1] and its figure below for an application on multilocus primate data (Pozzi et al. 2014). Here, one of several gene trees are shown constrained within the species tree. Node heights are in units of millions-of-years. Species node widths are proportional to effective population sizes and are coloured by subsitution rate under the relaxed clock model. Taxa which were lumped into species by SPEEDEMON are indicated alongside their posterior support. 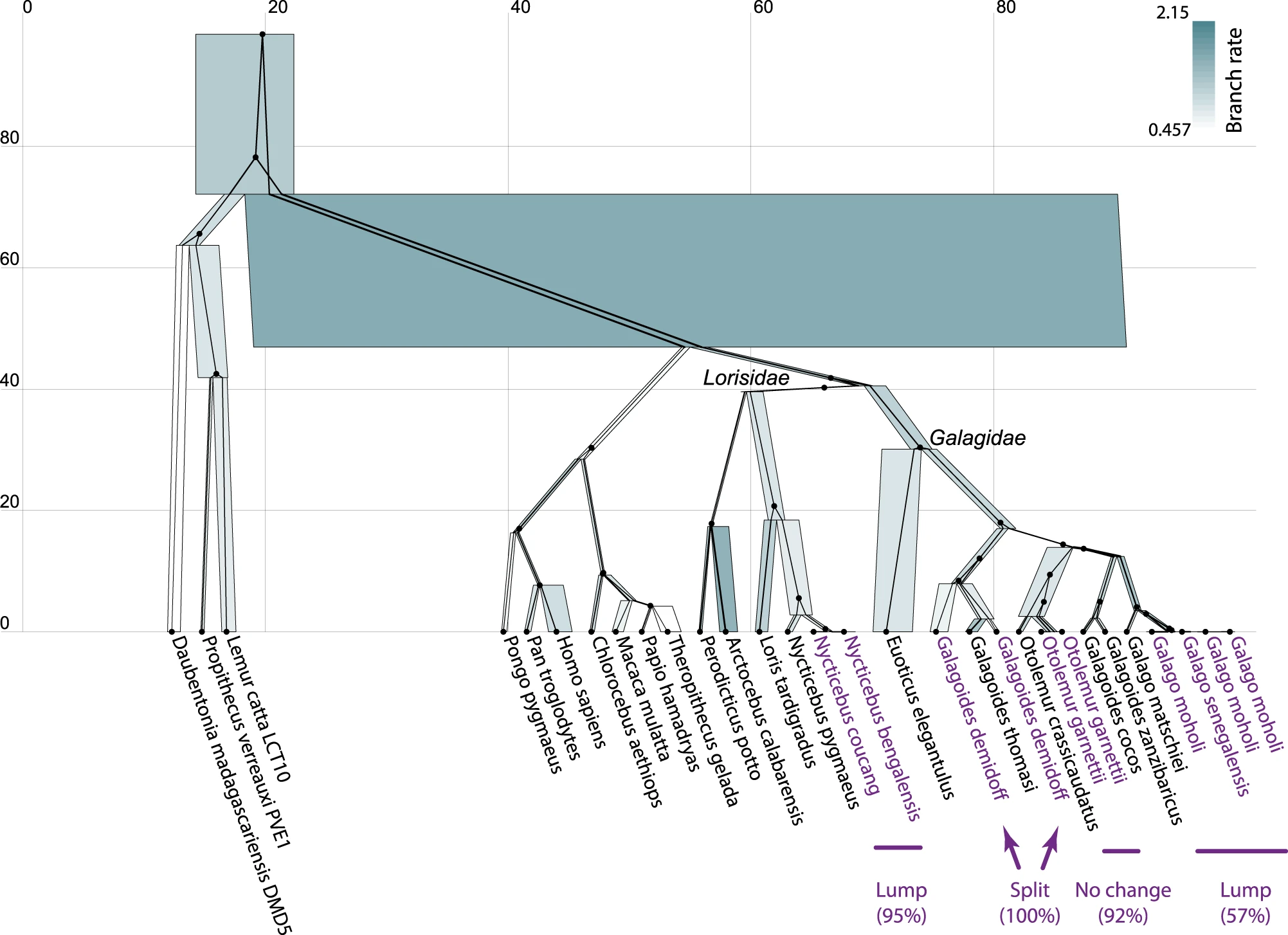 The threshold ε describes the maximum divergence that can be tolerated before two samples are regarded as separate species. Too large, and all taxa will be lumped into one species. Too small, and each taxa will be split into their own species.

ε defaults to 1e-4 in BEAUti, however I strongly encourage users to explore a range of values of ε, rather than treating it as a black-box constant. I note that species delimitation appears to be quite robust to ε in general, but a sensitivity analysis is still important on a case-by-case basis.

I refer the reader to the guide in ref [1] for selecting a range of values for ε, which is summarised below: